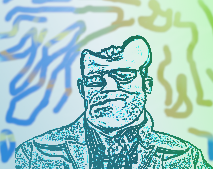 Your very own, Arlo.

You know, last night I attended a dual EA at my “plural” lodge (in point-of-fact, both my current lodges are plural – I dropped out of my Mother Lodge some years ago over some financial pinch I was feeling at the time – really need to rectify that – but that is another story).

I sat there last night thinking to myself about how a lodge – a group of Masons – how the lodge itself really has an individual personality.

Oh sure! It is made up of individual brethren.

But the character of the lodge itself…

Not the building now.

Anybody can toss up a building.

No I am talking in terms related to that concept of the church.

Remember that little ditty from where you were a kid?

How you’d clasp your hands together and do that thing. You know.

“Here’s the church, here’s the steeple, the church itself is really the people”.

It is the same with Lodges.

There is a certain zeitgeist about a lodge.

Individual men of differing personalities and yes, characters, come together to give that lodge its identity.

It becomes an entity.

This concept is not new to corporate America.

The courts ruled long ago that a corporation can act as a single individual. They do so quite very often in expressing their political opinion.

We are seeing that first-hand in the headlines now with a soft-drink company, a major airline and the governing body of a sports organization (several, actually).

The courts are correct.

A group of people may act as if they are a single person.

But think about this a minute from the standpoint of Freemasonry; is the bee hive really reduced to nothing more than drones who serve the colony and the Queen?

Without getting too awfully specific, we do stress at the very threshold that our individual volition counts (for something).

Immediately following that opening statement to our vows, we subordinate ourselves (our individual selves) to deity.

So the individual mason still matters in our thing. There is ABSOLUTELY NOTHING compulsory in the Freemasons (unlike other “families”).

But what is really more important – the individual, or the lodge? The brethren, here assembled, or “the order” (for which we have all sworn to be stewards “for the good of”).

It is a tough conundrum, harmony. Most-especially when it requires fidelity to the individual.

But one thing I think I can say with absolute assurance.

The character of an individual lodge does not fall far from the tree.

The world will judge the lodge, by its fruit. In other words, it is not simply the act of an individual Mason who can “spoil the barrel”, but also the communal acts of a lodge when that lodge behaves as an individual.

So on this occasion I, Arlo S. “leaving Las Vegas at less than zero” Archer will leave you with simply this…the men assembled in a lodge, together, define the character of the lodge itself.

I think that under the canopy of heaven, we should always be mindful of that great eye that looks down on us.

It is, after all, not one another (or the world) that we need impress with the grain of our harvest. Our vinyard is over-seen by only one Master, and he is the great “one in three” (at least in this Templar’s Lodge).

So, see ya next time fellow companions, sojourners, travelers, brothers and fellows!

This site uses Akismet to reduce spam. Learn how your comment data is processed.

The Avenue’s Other Tablets

Up in the Archives

Posts from the PAST